Reference of the stitch 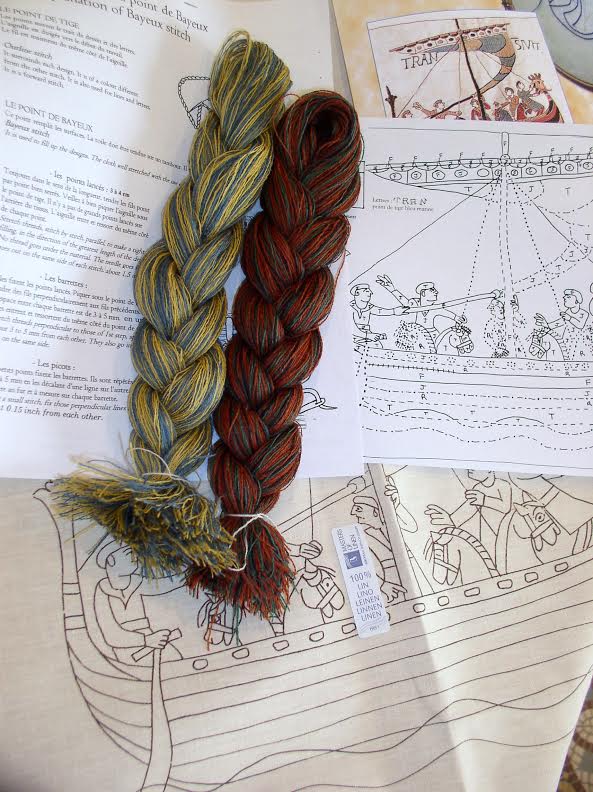 This embroidery stitch comes from the Norman and English tradition. It was used in the famous Bayeux Tapestry which is said done by queen Mathilda in the 11th century. This embroidery is roughly 76 yards long and listed on UNESCO's Memory of the World Register. The Bayeux Tapestry tells the story of the Norman conquest of England by Duke William and his men at Hastings on the 14th of October 1066.

An outline stitch is embroidered to make the drawings as well as the letters. These drawings are filled with, or "colored" with stitch threads (couchure): laid and satin stitch.

The tapestry is embroidered on linen with woolen thread in 7 dominant colors.

The tapestry was probably made in an Anglo-Saxon studio on the request of Odon de Conteville, bishop of Bayeux and William the Conquerors half-brother. It was supposed to legitimate the Norman power in England. This longue piece of comic-strip mediated the message to the people mostly illiterate.

The Bayeux Tapestry is now exposed in William the Conqueror Museum in Bayeux, Calvados

It surrounds each design line or letter.
The needle is to be pointed backwards.
The thread is to be kept on the same side as the needle. It is of a different colour from the other stitches.

Still lengthwise, stretch threads, stitch by stitch and in a parallel direction, in order to make a tight filling.
Be careful to stitch the needle under the outline stitch already performed.
There is to be no filling stitches on the reverse side.
The needle goes in and out on the same side of each stitch.

They allow to fasten the previous stitches.
Stitch under the outline stitch and stretch threads perpendicular to those of the previous first step (it is to say the filling stitches).
These bars are to be spaced about 3 to 5 mm from each other.
They also go in and out on the same side of each stitch..

These small stitches allow to fasten the bars.
The are to be repeated every 3 to 5 mm, being offset from one line to another.
They can be performed as one goes along each bar.

Instructions with more details in each kit to embrodery